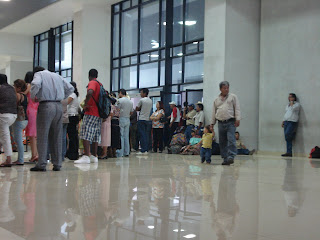 I am scarily programmed to arrive early to everything. I can make a concerted effort to arrive late to an event and still get there 15 minutes early. Given that my mother was freaking out about my brother’s safety upon his arrival last week in Guatemala City (a notoriously unsafe area), I planned to arrive 15 to 30 minutes early, which resulted in my arrival 2 hours before his flight got in.

Guate’s airport is undergoing major renovations. An excellent plan, considering when I arrived in country (over a year ago now), the airport was nothing less than a hole in the ground. Nevertheless, there is still a lot of work to be done. The waiting area contains no seating and nothing to do besides sit on the floor (if you are as disorganized as I am and always forget to bring something to occupy your time).

Fortunately, the airport is a great place to people watch, especially tourist watch. They come stumbling out of customs, weighed down by their giant backpacks and suitcases, dazed, confused and easily trapped by the first person to shout ANTIGUA! SHUTTLE! ANTIGUA! Much to my chagrin, I am constantly looped into this group and had to fight off several overly eager drivers who relentlessly tried to convince me I wanted to go to Antigua, Panajachel or Chichi. I thought it was quite obvious I was waiting the arrival of someone considering I had only a purse and I arrived by taxi, not through the arrival gate. Clearly they missed the memo.

While the tourists are fun to watch (and to make fun of), the most interesting part was watching the arrival of people who had obviously been gone for years, at best. Something to the effect of 1/12 of Guatemala’s population lives in the United States. Children here grow up without meeting their father, some women spend more than a decade without seeing their husbands, and mothers spend an eternity hoping their children will one day return and they will be able to see them again before they die. It is an amazing site to watch a family greet a member who has been gone for such a long period of time; to watch children meet a father who they have no real memory of. You can see the joy in their eyes, and the relief in their smiles.

On top of this, the airport is a place where you can see all spectrums of Guatemala’s population converge and mingle in one place. Given that racism is still so common here it is a rare sight to see every group, from rich Guatemalan’s dressed to the nines to indigenous families, the women in their traje with ribbons braided into their long hair. It gives you hope seeing such a wide array of cultures grouped in one place all happily focused on one thing: welcoming people home.
Posted by Sara Knechtel at 11:49 AM