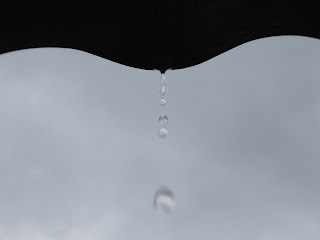 Rainy season… we had a nice little two week break, but its back in full force.
Posted by Sara Knechtel at 12:03 PM 2 comments: 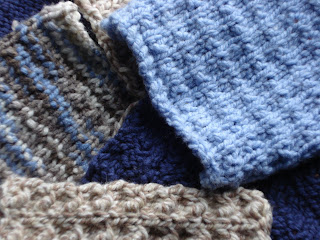 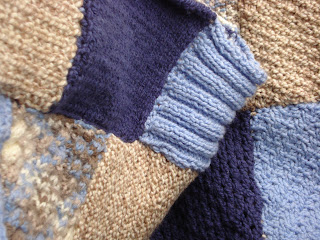 I think I am on the path to actually completing one of my projects. I know this will shock my mother. I have a tendency to be fickle at best. It would take more than two hands to count all the sports I tested out during out my childhood. My participation was generally limited to a year or less, due to loss of interest. The same can be said for all the activities and art projects I have started through the years as they never seem to get past the first phase. Many kudos to boredom as it seems to have inspired me to form a more firm commitment. The pictures above are of the blanket I am knitting in my “spare” time.
Posted by Sara Knechtel at 11:57 AM 1 comment: 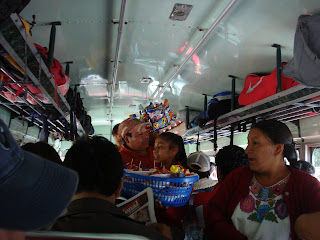 Buses are not always crowded, but more than often they are. Generally speaking I’ll be squeezed in between a slightly obese snoring Guatemalan male who is taking up half the seat while drooling on my shoulder and a nursing mother who is balancing three children on her lap, under her seat and in between her legs in order to avoid having to pay an extra fare. Rounding curves at lightening speed, it would be amazing that everyone doesn’t constantly tumble out into the isle, except we’re all pegged in place by the 30 or so people crammed standing into every last inch of remaining room on the bus.

This combination is made even more comical when stopped at a cola. Hoards of vendors come sprinting to the bus attempting to sell as much as possible before any one else can get on. They squeeze their way through the crowd, climbing over people and seats, slamming their baskets into unsuspecting heads and shouting their wares in the slow Spanish drawl typical of rural Guatemalans. ¡Chuchitos! ¡Hay chuchitos de pollo y de reeees! ¡Toma su chuchito caliente mamita! ¡Hay tortillas con carne, con pollo, chile relleno bien calentitos! ¿Qué le doy joven? I’m partial to chuchitos myself. My bus rides are no longer complete without one.

Colas are not the pain in my ass they used to be, now that I have gotten over my fear of street food and being left behind if I debarked the bus. They provide an opportunity for a snack, a bathroom break in the bushes and, best of all, a pause in the bouncing, swerving trip so I can actually read the Prensa Libre I bought with the intention of reading on the bus. I don’t get carsick from reading in a moving vehicle, but it’s impossible to read when you’re being thrown about like a barrel over Niagra falls.

I think I’m finally acculturating or adapting. Not that I still don’t have fits of madness where I swear profanities in English under my breath and elbow the guy in the gut who’s falling asleep on my shoulder. However, I am finally getting to the point where I can arrive at the other end of my journey without wanting to tear the head off of every person who looks at me the wrong way… or at least fall asleep on someone else’s shoulder.
Posted by Sara Knechtel at 11:52 AM No comments:

Guatemala isn’t quiet. I often wonder where the affection for loud obnoxious noises stems from, or why deafness is not a more common result.

There are no sound barriers here. Houses are constructed out of cement block and insulation does not exist. Therefore, something that might have been slightly annoying in the states, but mostly drowned out, is suffered through in full blown clarity. Music is blared, religious sessions are screamed and howled, bolos stumble down the street serenading the town with unintelligible songs and stereos are set at maximum volume for all public events – regardless of whether there are two or two hundred people.

I once sat through a wedding where marimba music was blared so loudly at the reception that you could not hear the person next to you speak unless they screamed directly into your ear. We sat through the event in silence for four hours – and no one danced. It’s not my iPod that will destroy my hearing but this preference of ear-splitting levels of sound.

Even the animals here are in on the conspiracy. Roosters, do not crow when the sun rises, but three hours before and every half hour from then on out for the rest of the day. I swear that the chuchos schedule their snarling brawls for 1 am, directly outside my house.

My absolute favorite, however, is the pig next door, which I have never actually seen. The first day I moved into my new house I could have sworn that the pig was being slaughtered. It squealed, bawled and shrieked with such intensity there was no doubt in my mind that my neighbors would be sitting down to a breakfast of bacon. However, after a few months here, I have become accustomed to its daily death cries that occur like clockwork every afternoon at 4 pm. It’s either cranking out piglets daily or just really hungry.
Posted by Sara Knechtel at 11:51 AM No comments:

Some of my fellow volunteers were confused about what I meant by this. More than a few assumed that I was going home – to the States – rather than home – to Cabricán.

After spending in all practical terms the entire month of July out of site, I am ecstatic that I am HOME. Which makes me wonder: when did I start referring to Cabricán as home? Is it in fact my home?

They say home is where the heart is, but I cannot claim that my heart is here. My cat, my stuff, and my “life” are temporarily stashed here. Temporarily being the key word. But my heart? I suppose Guatemala is growing on it. More than a few lifelong friendships have developed here. I love waking up here and watching the sun burn through the fog, the mountains slowly rising out of the mist, but I think my heart is back in the States, with my family, my past and my future. Perhaps my heart would be here, if it was committed. However, knowing this experience is transitory keeps my heart at bay. For what is the point of forming a permanent attachment to something that isn’t permanent?

The last couple of months have been a whirlwind of visitors. Having just said goodbye to my sister, and last visitor for several months, I am both sad and happy.

Happy, because I can finally spend some extended time in my site. I love having visitors, but it is emotionally and physically draining. It is hard to be away from your home, or stuff. It is hard when they do not understand Guatemala in the terms that I do, or cannot adjust to the differences in culture and amenities. It is hard living out of a backpack (and constantly losing your stuff).

I will not get to spend the whole month of August in Cabricán due to another training by Peace Corps. However, I think I am going to get three full weekends, and this is a feat in itself. I never thought I would say this, but I am not leaving my site if I can help it.
Posted by Sara Knechtel at 10:25 AM No comments:

One year as an official Peace Corps volunteer, one year to go, and significant changes.

I officially changed my counterpart agency to Cabricán’s Library: Biblioteca Nuevo Amancer. This has two benefits: first, the guilt of not working with my assigned agency has been lifted from my shoulders; second, I feel a more fixed work schedule will be more conducive to accomplishing more in my second year.

It is easy for me to place the blame on Peace Corps for my original placement, and to only see the negative side of the equation. However, this would not be rational. As a result of my first placement, I have learned to be more out going, more proactive, and more responsible. I have learned to seek things out for myself, rather than waiting for them to come to me. With the failure of my placement, came new opportunities that are more related to my interests and abilities. I was also able to choose them for myself, rather than wait for Peace Corps to find something that might or might not work out.

It would be easy for me to write off my first year as a failure as I have often wanted to do. But this would overlook all that I have accomplished and all that I have learned.

My APCD (Assistant Peace Corps Director) came out to visit a couple days ago to officially change my agency and to see what I have been doing over the last year. Feeling pressed upon to show some RESULT, I took him out to Loma Grande to look at my world map mural.

The result surprised me. Seño Amarilis, who teaches the classes I worked with for Fundamentos Empresariales, explained to my APCD how the children had taken over responsibilities for snack sales at recess after finishing this course. They picked out their own products to sell, including healthy items such as fruit which weren’t an option before, and were allowed to keep half the proceeds. They came up with the idea on their own. The teachers had not mentioned this to me, and had I not taken my APCD out to see the mural, I might never have known. This taught me to understand, although I might not see the results of my work, every action has a result, and I should not be so judgmental of my efforts.
Posted by Sara Knechtel at 10:03 AM No comments: