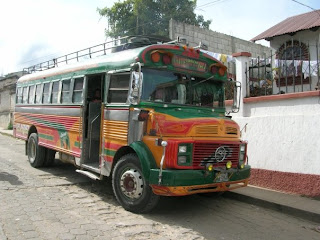 Guatemala has a gang issue, and recently it has begun to affect people in my community.

Violence is meted out with impunity here. Probably as a result of more than 15 years of brutal civil war in the 1980s and 1990s. Death and violence are looked upon as normal. Everyday the most popular daily paper Nuestro Diario’s front page is covered with tales of death and destruction. These stories don’t stop on the second page; they fill it from front to back.

Gangs have been taxing the bus companies in Guatemala City since before I arrived here. If a bus company refuses to pay, gang members climb aboard their buses and shoot their drivers and ayudantes (assistants, people who collect fares and place luggage on top of the bus). More than 15 people have been killed as a result this January. Unfortunately, the income of a bus driver is too enticing for men who need to support their families. The high instances of death on the job do little to deter desperate people from applying to these positions.

Until recently this problem was contained to buses traveling in and out of Guate, but a couple of weeks ago gang members started approaching bus drivers in Xela. My town’s buses were among those approached and given a choice: Q45,000 ($6000) or the lives of our bus drivers. Wanting to protect their own, the town’s bus companies pooled together and paid up.

The saddest part behind all of this is the fear that is developing as a result. It has always been considered very calm and safe here in comparison to other parts of Guatemala, but now people are not so certain of their security. Rumors are flying that the gangs are going to “tax” the stores here. The police traveled up from Xela last week to meet with the town and discuss their options. Community watch groups have been formed and now patrol the streets at night. People are less trusting of their neighbors and won’t go out at night for fear of being associated with the gangs… or attacked by them.

I am skeptical of the reach of the gangs in my town. I still feel safe here, as the bus companies paid up, I am not afraid to ride on the buses. It is sad however, to see the fear affecting my town. It’s unfortunate, but I feel it is only going to get worse.
Posted by Sara Knechtel at 7:46 AM 1 comment:

Six local primary schools and the local library in Cabrican have developed a project together to provide mini-libraries for their students. These schools and their communities are located in areas where there is little public transportation (if any) and therefore the students cannot make the trip into the center of town to use the community library's resources. We're hoping to provide the resources to these students to expose them to research projects and reading for leisure at a young age. In addition to providing these resources, the local library will be providing training to the school directors and teachers on how to manage their new resources and run story hours, reading clubs and create research projects. I hope you will take the time to read more about the project and/or make a small donation by clicking on the link provided. The students and their communties are already providing 60% of the project costs and will greatly appreciate your help!

DONATE!
Posted by Sara Knechtel at 8:57 AM No comments:

Affects of the Recession

It has not taken long for the recession in the States to affect us here. As isolated as we may be, there are infinite ties that connect us. In the past couple of months, immigrant workers have started returning, citing lack of work or lower pay. The number of people who approach me wanting to practice their English has doubled since September. Having been here for a year and a half, people had stopped asking me why I was here, and what I was doing, but this too has begun again. People who were in the states and have returned are shocked to find a gringa in their midst. They are unaware of how long I have lived and worked here. Many assume I am only here for the day or week, to complete some small project.

But this is not the only effect. The community library I work with is founded and funded by the Riecken Foundation. As many are aware, the recession in the States has greatly affected non-profit foundations such as Riecken. Many are stuck without funding, have lost important donors, or find themselves without access to credit. Riecken appears to be stuck somewhere in this mess. We were provided a supplementary budget of at least Q 1,000 per month (roughly $130) to provide materials and organize activities within the library. Since October Riecken has been unable to provide us with this assistance. In addition, Hugo Bulux, our director is paid by the Riecken Foundation and not by the municipal government, which pays the salary of our librarians. Starting next week Hugo and all Riecken library directors will only be paid part time.

This is not meant to undermine the work of the Riecken Foundation, which has been greatly appreciated here, but this situation highlights the importance of sustainable development. While Riecken undoubtedly has developed this community library into a hugely successful educational community project, it has not in its four years here, worked to make the library sustainable in the long run. The library still depends on Riecken´s monthly assistance and its payment of the director’s salary. All the work that went into the library could come undone if Riecken is forced to pull out. Of course this is not to say the community is not stepping up to the cause, the board of directors is making a request to the municipal government to pay the second half of Hugo’s salary until the end of the year or until Riecken is once again able to pay it. However, whether or not the mayor will agree to this is not clear, and it is very apparent that the municipal government is not keen on taking over the monthly costs of running the library. In which case, we are left to wonder, what will happen to this educational bastion if Riecken is forced to pull out?
Posted by Sara Knechtel at 8:46 AM No comments: 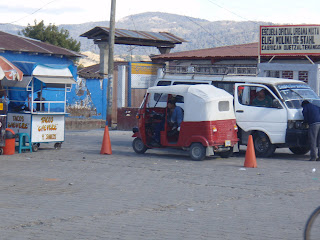 The tuk tuks have arrived! Tuk tuks are small three-wheeled motor vehicles that act as taxis here in Guatemala. Anyone who has been in Antigua will have seen these vehicles speeding through the streets with great alacrity. My town has recently acquired three which can now be seen barreling around town with passengers in tow. This has been one of several advancements (including an ice cream parlor, a “pizzeria,” a paved road and a larger daily market) that have arrived in town since I began my service here (in which I can claim no influence)!
Posted by Sara Knechtel at 8:44 AM 1 comment: 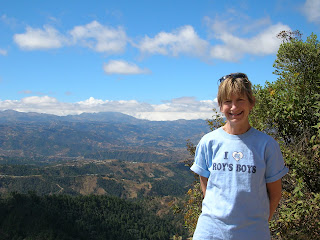 My mother left today to return to the States, and my month-long vacation appears to be officially over.

I was able to spend three weeks at home this Christmas, and while it was great to be home and to see all my friends and family, I am excited to be back. When you´re gone for so long, it is hard to realize how much things may have changed in your absence, and being back in North Carolina resulted in a bit of culture shock. I am glad I went though, as it will make me more prepared for my eventual re-entry sometime at the end of this year.

I was also lucky enough to have my parents and my aunt return with me to Guatemala. I got to spend my first week back staying in nice hotels and tourist spots, which made readjusting here much easier on me. They were able to climb a volcano, visit Lake Atitlan, and come out to my site to see where I live and what I do. Although I don´t think my house was the most comfortable place for them to stay, they got used to “roughing it” Peace Corps style (I maintain that it isn’t all that different from living in the States). My mother being the brave woman that she is, stayed an extra week with me in my site and got a much better idea of my life here. I also took her on a couple hikes, so she could see the beauty outside of the center of Cabrican… which, I am sure she will agree, is stunning.

(I would put up more pictures, but my camera was inadvertently filled with sand and is now non-functional… My aunt was nice enough to lend me hers until my replacement arrives, but I have no cord to upload the pictures… so my blog might be a bit bare for a while.)
Posted by Sara Knechtel at 8:37 AM 2 comments: