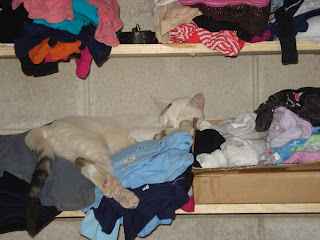 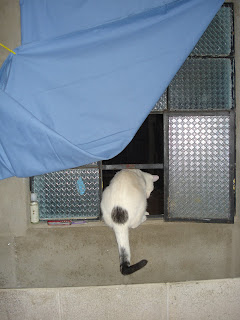 Posted by Sara Knechtel at 2:58 PM No comments: 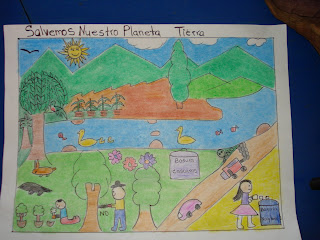 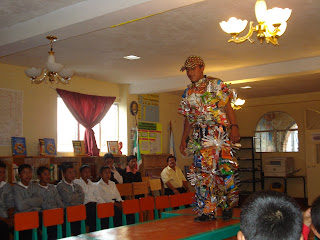 Today was international Earth Day and to celebrate we organized activities in Cabricán’s library. Children in primary school participated in a picture drawing contest, and those in secondary made clothes out of trash. The idea was to foment the practice of throwing trash away in its proper place and to raise awareness of the destruction of the environment. Several people gave speeches, we played videos on global warming and Andrea Pérez (Art Corps), Esben and I were judges of the contests. Unfortunately, I think there was a little to much focus on the contests and not enough on Earth Day, but I have next year to perfect and, on the bright side, Esben who works in the forestry office in the Muni is trying to plan activities for Tree Day on May 22.
Posted by Sara Knechtel at 3:13 PM No comments:

Plumbing is primitive in Guatemala, which may explain why I have to flush my toilet twice to get it to drain, my shower requires plunging after every use, the bathroom has a strange odor that never leaves, and the sink leaks. However, the scariest part about the bathroom for most foreigners is that water is heated by a “calentador,” a small contraption attached to the pipe which heats the water with electricity. Contrary to what we all learned in school, water and electricity mix. Due, I suppose, to the average height in Guatemala, I have to duck under my showerhead which means I am knocking into it on a regular basis. This makes me wonder if smacking my head into the calentador will one day result in a new form of the electric slide.
Posted by Sara Knechtel at 3:11 PM No comments:

Peace Corps gives you lengthy advice to avoid amoebas, bacterial infections and other nonsense, including: boiling your water, washing your produce with bleach water, peeling or boiling vegetables, brushing your teeth with bottled water and avoiding street food. While I can adhere to most of these precautions, street food is something I haven’t been able to avoid. Three tacos for Q10 on your way home from a bar is hard to resist, and Q2 chuchitos when stuck in a cola are a godsend. Having indulged in just about every street food offered, I was beginning to think that I had worked up a resistance to these illnesses… Alas, this was not the case.

I discovered much to my chagrin this Wednesday, that I have a serious case of amoebas. After spending most of Monday and all of Tuesday in misery rushing from my bed to the toilet (I’ll spare you the gory details), I finally worked up the courage to risk the two and a half hour bus ride into Xela to get things checked out. I had delayed in the hope that things would improve on their own, and because they rarely find anything to treat in the tests anyway. However, since the next two weeks are packed full of activities that I have to attend: Earth Day, AIDS training, and a Fundamentos teacher training in Cabricán, I really didn’t have a choice. Now, on the road to recovery, I am chugging three liters of Gatorade a day and starting a month long treatment to rid me of these pesky critters.

While I will definitely be taking more precautions in the future, I doubt that this week’s pain is enough to make me give up the delicacies of street food. I can’t even prove I got them from street food in the first place. Even though I ate some over the weekend, it appears from the size of the infection, they were sitting latently in my stomach for quite a while before they decided to flare up this week.
Posted by Sara Knechtel at 3:09 PM No comments: 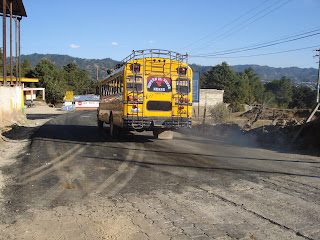 Asphalt reached Cabricán yesterday. Celebrated with much fanfare (complete with a marimba band) the newly paved road means the end to traveling down dirt roads… if you are headed in the direction of Sibilia. Unfortunately, most buses take the route through Sija, which means the road is only paved until the next municipality of Huitan and then it is dirt again for the next hour until Sija. On the bright side, they have gravel down on most of this route now, which means (hopefully) it will be paved shortly.
Posted by Sara Knechtel at 2:59 PM No comments: