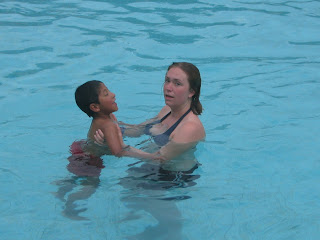 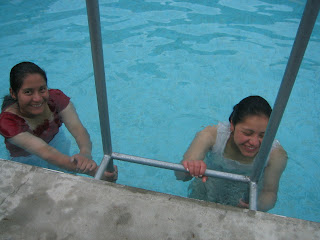 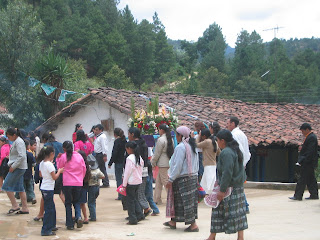 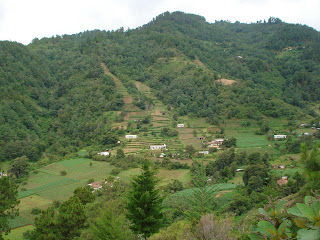 Reina took Juliana, Roberto, Brian, Andrea and I out to some hot springs in the north of the municipality of Sija yesterday. To get to Aguas Calientes, San Carlos Sija we woke up at four in the morning and hiked an hour out to Cienaga Grande where we caught a bus at 5:30 that takes a route through the department of Sija into Xela. From where we were dropped off it was another 30 minutes to an hour hike downhill into Aguas Calientes.

These hot springs are different from those of Aguas Georginas, near Xela, in that they are not a tourist attraction and are used only by locals. They are not as pretty as Aguas Georginas, but they make up for that by the lack of tourists. By happenstance, we arrived on their feria so the town (which isn’t much more than one road) was overrun with people. A band had come in from Totonicapan, and there was a parade for the patron saint.

I think I managed to scandalize the town in my bikini, however, with all the blue-eyed, fair-skinned children that were running around, I think more than a few people have spent some time in the states and were a little more used to it than Cabricanecos would be.
Andrea and I spent a lot of the morning trying to teach Roberto how to swim, and he was catching on really quickly, putting his face underwater and giving it a try. I think if he had a couple days in a pool he would quickly pick up on it. Unfortunately, pools are hard to come by in this area, and the chances of that happening are slim. Most people in Cabricán, including Juliana and Reina, do not know how to swim.
Posted by Sara Knechtel at 10:32 AM